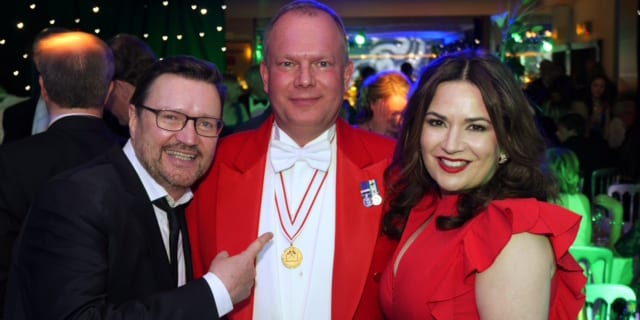 I was delighted to be asked to help out as the Toastmaster and MC at the recent charity ball held at St Davids Park Hotel to raise funds for a new specialised wheel-chair for little Gracie.  With over 150 guests they were entertained by 10 members from the cast of Coronation Street.  I worked closely with Ian Puleston Davies who plays Owen Armstrong and he wrote the very kind testimonial below.

When I was asked to organise a formal charity ball at St. David’s Hotel in Hawarden, North Wales, there was only one man I wanted to join the team – Chris Caroe.    Chris is an utterly professional Toastmaster and, resplendent in his red uniform, he makes an impressive figure. But his role that night was much more than making announcements!  His unflappable composure and calm assured manner ensured that the whole evening – a fast mix of charity auction/celebrity acts and dancing, flowed smoothly and without hitch. He not only organised a large, boisterous audience, he also ensured that the celebrity entertainers were given the appropriate support and structure and cleverly controlled the momentum of our ambitious schedule. He helped make the event both enjoyable and very successful. We raised an extraordinary amount of donations to buy a specialist wheelchair for a disabled child…..so “thank you” Chris from both myself and little Gracie!

This site uses Akismet to reduce spam. Learn how your comment data is processed.